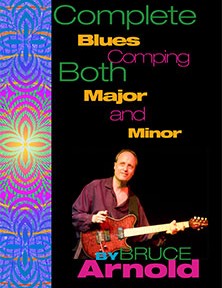 Develop many important musicianship skills simultaneously with this course!

The purpose of this course is to have one exercise that improves multiple aspects of your musicianship at the same time.

First thing to realize that this is a fun course. You are actually getting to play music while developing all the skills listed above. The MP3s play the chord progression one chorus then there is only a metronome clicking on 2 and 4 for one chorus. The student improvises or comps the changes during this chorus. The accompanying chords then come in and play the next chorus of changes. By working with these MP3 files you will develop a feel for both a Major and Minor 12 bar blues form.

A great companion for Chord Workbook for Guitar Volume One

Proof is in the playing!

If you can play along with these files without making a mistake you are ready to play a duet with someone or play with a band. The skills developed with these MP3s is what it takes to bring you to a professional level when playing the blues.

Proof positive that you are ready to play with others.

Complete Blues Comping both Major and Minor Develops many skills simultaneously. A students ear training, time, feel, harmonic palette, sense of form and ability to play with others is all developed at the same time. This course uses a Major and Minor Blues chord progression to instill the skills. A Major and Minor Blues chord progression is of course found in almost any style of music. Therefore the MP3s will give you the experience and the confidence that you need to play with others while at the same time improving the aforementioned skill set.

Get Complete Blues Comping both Major and Minor...download today!

Recommended books to use with Complete Blues Comping both Major and Minor.

What should I work on after Complete Blues Comping both Major and Minor?