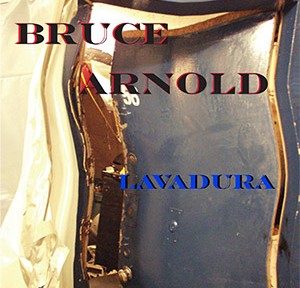 October 22, 2012: one of the maintenance men at New York City’s artist residence complex at Westbeth was laying down sandbags, preparing the studios that lined the city block sized building’s basement for what was reported to be a “super storm.” He heard a loud noise and looked down the long corridor leading to the exit and saw a 3 foot high wall of water approaching him. By the time it reached him, it was 5 feet high, and had swept him off his feet, and the lights had gone out. The water continued to rise, pressing all the exit doors shut, until he found one that had been left open. He managed to escape with his life.

Since then many stories have been written about the damage done to the studios in Westbeth. No one had been prepared for the ferocity of the surge, and countless works of art, instruments and equipment, left to soak in a combination of saltwater, sewage and heating oil for a week, were damaged beyond repair.

As Bruce Arnold slogged through the heap of toxic slime and filth that had once been his state of the art recording and rehearsal studio, he realized that not only had he lost material possessions, but the files of the CD he had been working on for over a year were history. A back injury had prevented him from bringing his backup drives home; along with many precious sessions, he had nothing left of “Lavadura”  (Dirty Water) a CD he had named without ever realizing its implications.

Or so he thought.  He had given a CDR of a rough mix of the final product to drummer Kirk Driscoll the week before the storm, and with the wizardry of mix-master Tom Hamilton, most of the CD was salvageable. But packaging and mastering costs money, and trying to get data out of drowned hard drives does as well.  Arnold created a Kickstarter campaign offering free music lessons and products from the Muse-eek catalogue in exchange for donations. Within days he had made one and a half times what he had asked for. “It was a financial boost for sure,” says Arnold “but more than anything it made me feel really good about people, at a time when I felt really low. The government aid people can make you feel awful, and I was pretty thin skinned, so I needed something to counterbalance that.”

“Lavadura” is a darkly exciting excursion into modern instrumental rock. The title track rips off with Arnold creating a frenetic electrical cascade against which the melody lurks on bass. Other standouts are the lyrical “Understanding” and the driving dissonances of “Hexo-Plex.”  Through it all, the beauty and versatility of the Music Man Double Neck guitar that he played for the session, shines through. (That instrument unfortunately did not survive). “It’s not exactly how I envisioned the CD,” says Bruce, “but I’m just so happy that it’s alive and out there.”