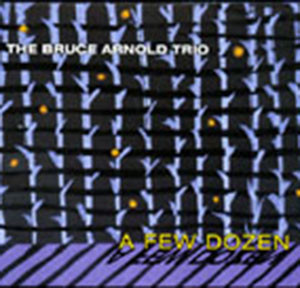 On his latest CD, “A Few Dozen” (MSK112), guitarist and composer Bruce Arnold presents a tightly knit set of tracks based on twentieth century classical structures, that run from upbeat swing to lyrical ballads to rumba clave. In addition, the music is enriched by electronic sounds which create atmosphere and orchestral density. In on the fun and rounding out the trio are Ratzo B. Harris on acoustic bass and Tony Moreno on percussion and drums. Arnold writes, “The more I listened to the works of various masters, the more I felt that the elements they were working with could refresh and expand the possibilities of jazz.”

Bruce Arnold has been creating vital and thought provoking work since the release of his first solo CD,”Blue Eleven”, which Jazziz Magazine called “a frazzled blast of electro-bop.” More kudos followed, with CMJ hailing Arnold as “a remarkable guitarist with a powerful intellectual approach.” Bruce Arnold grew up playing rock and blues in his home town of Sioux Falls, South Dakota. He earned his music degree at The Berklee School in Boston, where he became one of the most highly sought after guitarists in the jazz scene there. After moving to New York City, he created The Bruce Arnold Trio and rekindled his interest in twelve-tone composition. He currently also works with Release The Hounds, a free improv trio with Chris Dahlgren (The Jazz Mandolin Project) and Jay Rosen, and Spooky Actions, an ensemble devoted to standing the work of Webern and Schoenberg on its head. In a more mainstream vein, he is a member of Harvie Swartz’s remarkable Jazz-Latin band, Eye Contact, where his feel for Latin forms coupled with his avant-garde sensibilities helps the band to create a singular take on clave. Bruce is also currently performing with Roberta Piket’s Alternating Currents with Roberta Piket on piano, Jeff Herchfield Drums and David Ambrosio Bass.

“A few dozen, for twelve tones, takes us on a musical exploration in the classical structure venturing us from ballads to rumbas. Bruce Arnold, who has written all of the compositions on this CD, is complemented by two superb musicians, Tony Moreno, drums and percussion and Ratzo B. Harris, acoustic bass. Together, they take us out a bit but do not lose us on their musical journey. All the compositions are extremely interesting and bear re-listening. I found this set to be far from academic as it does contain elements of charm, humor and it swings hard in places as well.

The CD opens with the title track, A Few Dozen. Played in a total twelve tone environment, it manages to swing well with some nice lines from Arnold and sparkling rhythms from Moreno.

Reflection is a dreamy ballad that has some nourishing lines that paint a lovely portrait. Ratzo plays an in depth bass solo in back of some lush compings by Arnold. Listen especially to the brush work in back of Arnold’s solo.

7th. Street demonstrates some swinging trio work in back of a twelve tone blanket encompassing the group. There are some rather intense moments that sparkle throughout the piece like the dialog between Moreno’s drums with R2DT.

Numbers prelude floats like a mobile in space and is dark, brooding and mysterious. There’s an eerie feeling in the music reminiscent to that of a Kubrick film.

Broadway Y2K is a mixed bag with some swinging Latino lines.

Dialog is completely a twelve tone contrapuntal extended piece. All three swing in a remarkable way. There is a complete feeling of freedom during the solos. Ratzo plays a remarkable bass solo that defies musical gravity as he explores, wanders and expounds upon the outer reaches of his instrument.

A few dozen is rich with new ideas for jazz. For most of us this is a welcome addition to the jazz vocabulary. These three, very talented players, have a lot to offer us and we look forward to future recordings. ”

“Bruce Arnold’s work, at its best, combines spontaneous flare and ingenuity with rigorous discipline and powerful intellect. His debut, Blue Eleven, was wildly inventive and rewarding in its approach to modern jazz composition. Arnold draws much of his inspiration from twelve-tone composers like Schoenberg as well as more die-hard serialists like Babbitt. The resulting head-on collision between freedom and restriction was what most impressed me about Blue Eleven, and A Few Dozen is the next logical step. It’s more assured, more at ease and yet in many ways more stringent in its intellectualism. Whereas Eleven offered a disparate range of styles, from strange eleven-bar blues forms to straight-ahead art songs, on Dozen Arnold seems to have settled into his sound, which is modern jazz structured with serialist techniques. There are many powerhouse tracks on this disc, but my favorite is the haunting opus “Numbers”. It is split into two parts, a prelude and a piece-proper. The prelude establishes a distinct, brooding mood. Its washy synth pads gain forward motion thanks to the momentum of a pulsing tabla rhythm. When the piece-proper begins, a subdued bassline mumbles dejectedly, underpinned by sporadic, spastic percussion hits. In short order a sparse, angular guitar phrase establishes itself as a sort of structural base from which Arnold engages in his flights of melodic fury. This piece works so well because Anold’s bandmates, bassist Ratzo B. Harris and drummer Tony Moreno, know how to stay out of his way and let him fly. They support, accentuate and provide context for Arnold’s driving, spontaneous forays. Tracks like this represent Bruce Arnold at his deeply communicative and rewarding best! I sincerely applaud him for his inventive and innovative approach to jazz composition.”
—Noah Wane, splendidezine.com

The dozens are everywhere: each song uses a 12-tone scale, which you don’t hear in jazz much. (Devised by Arnold Schoenberg, twelve-tone is a staple of modern classical music.) The themes wiggle in odd directions, a snaky guitar with an active bass. Bruce Arnold has a clear, edgy style (like Kenny Burrell in the ’70s); he steps nimbly through “A Few Dozen”, and unlikely blues. When the theme’s dispatched, Arnold goes racing, with muscular notes; Ratzo Harris plucks a storm, reaching as high as Bruce. The structure’s different but the tune is accessible, in an offbeat sort of way. Different but familiar – I like that, and there’s a good chance you will. There’s a moody waltz on “Reflection”, its theme vaguely like “Monk’s. It belongs to Harris, whose bass has force, whether walking or skipping. (You really hear that on “Dialog”, where he almost sounds saxlike!) “7th Street” jolts on odd chords, and wait for the end: Bruce stirs the theme ever faster, then adds dissonant bleeps – it’s a keeper. For dessert, try “Y2K”: the twelve tones are set to a rumba clave! it’s an avant-garde party; this one you can dance to. And, abstract as it can be, this isn’t just loft music. It may please your mind, but not without tickling your ears.
— by John Barrett, jazzusa.com

“There’s a gentility to the guitarist’s work even when it gets ready to rumble. That makes the new trio outing “A Few Dozen” both lyrical and jagged. Ratzo Harris’ bass and Tony Moreno’s percussion signal that empathy level is high, too.”
—Jim Macnie, The Village Voice

“It’s appropriate–given the new year, the new century, the new millennium, yada yada–that the January jazz releases include unusually pioneering efforts. Some come from established artists, some from relatively unknown new performers; all have compelling qualities.
The use of 12-note rows in jazz has popped up from time to time, rarely successfully, given the relatively non-harmonic nature of serial composition. Guitarist Bruce Arnold’s new album, “A Few Dozen” manages to maneuver its way through a difficult musical thicket to produce some intriguing results. It’s not clear to what extent Arnold has actually attempted to use the serial method of proceeding through a 12-note row (with its retrograde and inverted forms) as a fundamental element in the way he has structured the music. But, ultimately, what matters is the effectiveness of the results rather than the nature of the method. And Arnold’s music–as performed by his trio, with drummer Tony Moreno and bassist Ratzo B. Harris–never loses its contact with jazz, even when both the linear and clustered sounds emerge in unexpectedly acerbic fashion. At the very least, he deserves credit for his effort to expand the potential of the jazz palette.”
—Don Heckman, Los Angeles Times, National Edition