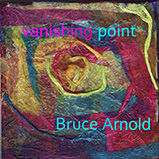 For a Limited Time Get "Vanishing Point" at a special low low price!

If there was any question that Bruce Arnold has the chops and style to handle heavy duty Progressive Rock, this CD answers the question with a very very loud YES. “Vanishing Point” finds Bruce Arnold exploring the Heavy Rock style and reveling in it. Compositions range from in-your-face screamers to arena rock ballads with soaring guitar solos. But true to his art, each song contains the compositional elements that are his signature: a rigorous theoretical structure, surprising angular melodies and chord patterns, tricky rhythms and underneath all, an emotional core. Each track has an array of tasty guitar sounds generated entirely through the Fractal Axe-FX II audio interface for your listening pleasure. Solid bass and drum work from Kirk Driscoll and Jerry DeVore round out the sweeping sound, while tons of cool programmed sounds add to the fun. And in case those of you who follow Arnold’s work are wondering, all songs and solos on “Vanishing Point” ARE based on the pitch class set 025.

The opening title track “Vanishing Point” starts with a riff that seems to have a regular metric feel until the band crashes in, giving it a menacing thrust. As the track progresses, rhythmically shifting power chords keep the ensemble on its toes, as Arnold keeps the hurricane force solos happening.

The other tracks on Vanishing Point are: