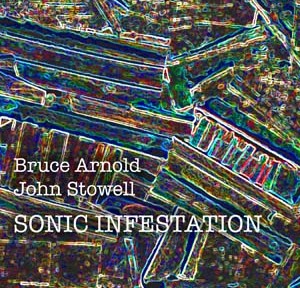 "Sonic Infestation" Bruce Arnold has literally deconstructed a free improv session he recorded with the wonderfully inventive John Stowell. Using parts of the improvs, whole sections or superimposed tracks and a gamut of processing, he has created some very unique and to my ear, abstract, music. When I tackled the graphics for this CD, I approximated the process Bruce had used by taking one of my own abstract collages and processing the colors, lines and overall composition using various Photoshop filters. Look and listen. Michal Shapiro

Sonic Infestation is a duet record where all the sounds you hear were played on guitars or drums. What makes this recording different is either the overlaying of one piece of music over another or the processing of the guitar parts to make new sonic events. The session consisted of a series of acoustic guitar duets and one multi layered electric guitar duet with John playing both guitar and percussion while Bruce did multiple layers of guitar processed through supercollider. In the case of the overlaying of two different piece of music this was done at random fashion with relevant material from both pieces being combined to make the whole. The acoustic guitar pieces were duplicated with those tracks being processed via protools or supercollider to create accompaniment or new musical sections of the relevant pieces.