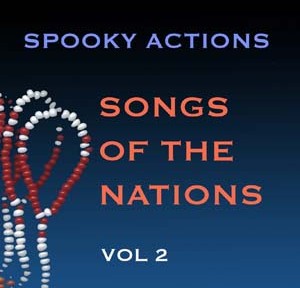 In a follow up to their first CD of Native American songs Spooky Actions has once again come up with enduring melodies culled from their researches, and set them in sparkling, sophisticated arrangements.

The tracks on the CD are not in any way an attempt to recreate the sound of the original dances, prayers and songs. Rather, the melodies are the building blocks and inspiration for the ensemble to fashion its own interpretations while revealing the loveliness and strength of these tunes.

The core of Spooky Actions is John Gunther (winds) and Bruce Arnold (guitars and SuperCollider). It has been a fifteen year association, one that started with a meeting at New York University where both were teaching. An immediate affinity was discovered, as both realized they were interested in expanding the jazz repertoire to include material rarely associated with that genre. What followed were a series of CDs ranging from Early Music and Native American Music through the Viennese School and the work of Olivier Messiaen.

Joining Arnold and Gunther on this outing are Kirk Driscoll on drums and percussion, and Michal Shapiro and Thomas Buckner on vocals. Mr. Buckner, who is a well known operatic baritone was personally drawn to this project through his own fascination with and participation in Native American culture. The songs themselves hail from the Chipewa, Omaha, Navajo and Muskegan nations.

The range of moods is varied, from the upbeat and energetic “Eagle Dance” and
“Prayer of the Warpipe” to the lyrical: “Peace Pact Song,” “Morning Star,” “For Divining the Outcome of a Love Affair” and “Love Call.” “Yee Be Chi Dance” and “Omaha Prayer” are more ruminative and atmospheric. –And there is an almost courtly feel to the closing track, “Hunting Song!”

All the musicians felt strongly about giving back to the people whose traditional heritage was the inspiration for the recording. Therefore as mentioned above, all profits from the sale of this CD will go to the Pine Ridge School, in South Dakota.

Get Songs of the Nations Volume Two…today!