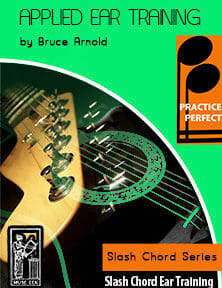 The Three courses in Practice Perfect Applied Slash Chord Series cover the use of tertial build slash chords. Tertial just means the upper structure of the chord is built in 3rds. This is the most common type of slash chord. If you are new to slash chords then keep reading I explain them in detail in just a minute. Each book in the Series explores a common way that these chords are used and give you exercises to help develop your ability to hear a key center while these chords are playing. So you get the best of both worlds. You learn a beautiful new way to create chords and you develop your ear training skills at the same time. To our knowledge there is no other series of books that goes into so much detail on:

And let us not forget the complex set of principals that govern what scales can be used over any slash chord. That is a deep subject and again to our knowledge hasn't been covered in any other book. Take advantage of the 3 Slash Chord Series bundle because it really takes you from the beginning of slash chords to quite complex applications. Volumes Two and Three apply these principals for a 12 bar blues progression and who doesn't love to play the blues! You can really spice up your chord playing and compositions with these chords and it doesn't take an advanced degree in music theory to do this. Just follow the simple ideas presented in the books. Take a listen to the various tracks used in this series. You will see and hear all the interesting ways a slash chord can change a chord progression. There are also videos for each chord progression so that can help you follow through the chord changes and hear and see each structure as it goes by. 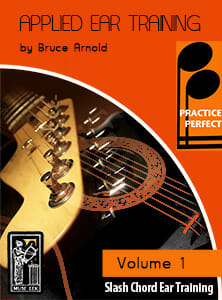 Practice Perfect Applied Slash Chord Ear Training V1 is the beginning of a Slash Chord Series of courses to help you hear and understand slash chords. Slash chords are usually 4 note structures where there are 3 notes on the top of the voicing that form either a Major, Minor, Diminished or Augmented Triad and then a bass note is added below this structure. They are written with a slash between the upper structure and the bass note. i.e. D/C is a D triad with a C in the bass. These chords are used extensively in pop, rock, R&B and jazz. Most people are aware of these chords from bands like Steely Dan and Stevie Wonder.

Practice Perfect Applied Slash Chord Ear Training V1 covers the slash chords that can be derived from a C Major Scale. While this might seem like only a few possible chords, that is far from the truth. You can take the diatonic chords of C: C major, D minor, E minor, F major, G major, A minor and B diminished at put all these chords over C, D, E, F, G, A and B bass notes. That is a lot of different chords and is a great place to start to learn slash chords because most of you play songs with the typical diatonic chords so you can immediately start replacing these chords with the slash chords. Listen to the examples below, they are beautiful sounds, get this book and start using these sounds in your playing. Most slash chords are easy to play on a piano or guitar. If you are a composer then you can immediately start putting these chords into your new compositions. 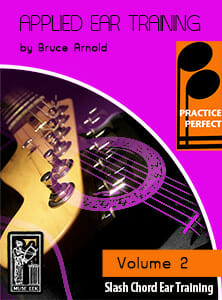 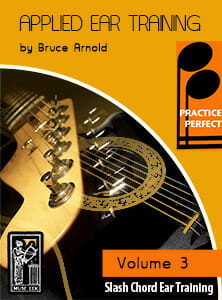 Practice Perfect Applied Slash Chord Ear Training V3 as was the case with Volume Two uses a 12 Bar Blues to explore different ways that slash chords are build over an original chord progression. Volume Two showed you how to derive slash chord based on the original chord scale for each chord. Practice Perfect Applied Slash Chord Ear Training V3 takes a common approach that musicians use by looking at the chord type and deriving a slash chord from a combination of the chord tones and available tensions. This can create a much more diverse and in some instances a much simpler or complex set of changes. Since this technique is so widely used by musicians it is important that you at least work with these progressions to not only hear them but to understand the principle behind which they are built.  This Slash Chord Series will change both your aural and mental perception of slash chords. 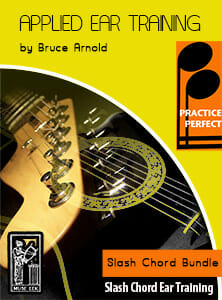