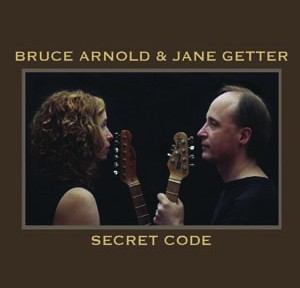 In “Secret Code” Jane Getter and Bruce Arnold present duets based on original compositions and improvisations. Each player contributes three original pieces, allowing their stylistic interactions with each other to dictate new settings. Each piece is separated by brief but fully realized free improvs. Stemming from the traditional straight-ahead jazz guitar duo concept, these interactions run the gamut of electronic textures; from distortion and wah-wah to synthetically processed sounds, as well as more organic, mellower palettes.

“I always loved the guitar,” muses Ms. Getter. “My parents had me taking piano lessons and my sister was taking guitar lessons.” I would sit at the top of the stairs and listen enviously. I swore to myself I would play guitar some day.” That desire turned her into a formidable award winning electric guitarist and composer. She tenured with the Saturday Night Live band, but it was working with the Hammond B-3 player Jack McDuff that jump-started her journey off of the straight-ahead jazz path. “When I went on the road with Jack, his hard swinging jazz/blues grooves created a party vibe, with the audience clapping their hands and having fun. I realized that a big part of what I love about playing music was connecting with people. From then on, my writing became more groove-oriented.”

As for Arnold, he can remember his first love affair with the guitar clearly “My parents bought me an accordion when I was a kid, but I really wanted to play the guitar so badly that I’d use anything I could find– brooms or tennis rackets to pretend I was playing. My folks got tired of all the broken brooms and tennis rackets and finally bought me a guitar.” Although his journey has led him through some of the most intellectually circuitous musical terrain his roots still go back to blues and rock. “I think that’s why we get along so well musically’ explains Getter “Bruce is really fun to play with. He can be funky, and he can be serious, and he’s always ready to try something new.” As for Arnold, he says “I totally enjoy playing with Jane. She writes great stuff, but she never strays far from the soulful blues thing.”

“Secret Code” starts off with Getter’s bittersweet “If Only You Knew” with a chromatic head and (typical for the composer) deceptively challenging chord progression. Arnold’s “Spurge” (his most often recorded tune) gets a new freely improvised and surprisingly sweet, albeit serial-based, prologue. The title track, “Secret Code” also benefits from an all harmonics, crystalline improvised intro before settling into its 6/8 theme. “Blues for Arnie” is dedicated to Arnold Schoenberg, and is Bruce’s guess at how the composer might have approached the blues style. “Exsqueeze Me” launches right into a funky 7/4 shuffle after some jaunty (and recurring) wah-wah work. Arnold’s “Factorial,” the longest piece on the CD, gets the full orchestral treatment, complete with distorted guitars, and sounds processed through the computer program SuperCollider. (In addition there is a spoken interlude with the musicians reading definitions of “factorial” from Wikipedia.) The tune sports Arnold’s signature serial based structures, in this case, based on 027, 016, 027 and 026.