Shop Muse Eek > Recordings > Quartet for the End of Time 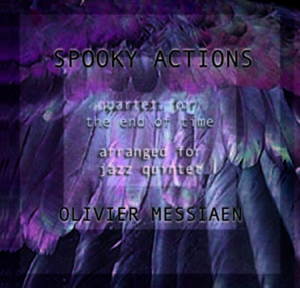 Quartet for the End of Time

Spooky Actions (led by John Gunther and Bruce Arnold) is back with their unique take on the "Quartet for the End of Time" one of the most popular pieces of 20th century classical music.

Noted for applying jazz improvisational and textural techniques to non-jazz repertoire, Spooky Actions has so far charted new territory with Early Music, Native American Music, the music of the 2nd Viennese School, and now, the work of Olivier Messiaen. In this recording the ensemble has been expanded to accommodate an arrangement for Jazz Quintet. The lineup is: John Gunther on soprano saxophone, Bruce Arnold on electric guitar, Tony Moreno on drums, David Phillips on upright bass, and Aaron Jackson on piano.

The Quartet was started while Messiaen was in the French army, and completed while he was a prisoner of war in a German Stalag. It is his first and most famous work wherein he integrated his deep knowledge of bird song into his compositions. He was known to rise before dawn in order to hear the first calls and chattering of the local flocks, to steep himself in sounds that were endlessly fascinating to him, and he claimed to be able to identify fifty different patterns specific to European species. The songs, particularly those of nightingales and blackbirds, transported this devout Catholic, and enabled him to imbue the Quartet with grandeur, despair --and hope.

The Quartet presented specific challenges to musicians then and now, written as it was for the specific virtuosos that Messiaen was interned with. The famous 3rd Movement " Abyss of the Birds" calls for exceptional prowess on the part of any clarinet player (or in this case, soprano saxophone), and transferring cello parts to the upright bass calls for a musician with unusual mastery of that larger, less agile instrument. The addition of drums to the palette of the piece (which is not scored for any percussion) calls for a touch that is exceptionally subtle.

As they have with other classical pieces, Spooky Actions states the original work as written, and then uses that as a jumping off point for improvisation (they have done this with Movements 1, 2, 4, 6, and 7). This requires unusual skill and theoretical understanding of the composition, and as always, Spooky Actions delivers thoughtful and insightful work.

The name Spooky Actions derives from a quote by Albert Einstein describing the mysterious ability of two distant and seemingly unrelated objects to exert an effect on one another. In this CD, Spooky Actions, proves that the relationship between modern classical music and modern jazz is not as "spooky" as most people might think.

Get Quartet for the End of Time...today!