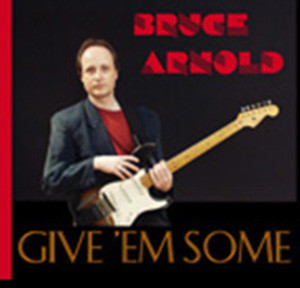 Bruce Arnold has built his reputation on his critically acclaimed explorations into twelve-tone structure. He now presents a CD of music that is both muscular and intellectual, bringing together the interactive nature of jazz with the hard driving groove of rock and the bracing, bittersweet flavor of post modern classical sounds. The three musicians, Bruce Arnold, Ratzo B. Harris on bass, and Tony Moreno on drums and percussion have played together for 10 years. They negotiate this landscape with grace and passion, and Bruce lets loose with the fiery inspiration that has made him one of New York’s established artists. On first hearing “Give ‘Em Some” a listener might not focus on the stringent form that went into this set of 6 compositions for trio. The pieces, made more accessible by blues or rock structures may sound simpler than Mr. Arnold’s previous work. “The challenge was that I was soloing over some pretty shifty twelve tone based chord patterns, and rocking out at the same time,” says Bruce. “But I really let loose on this CD.”

The Tracks: “Blues for Arnie” is a piece dedicated to the seminal composer Arnold Schoenberg. Not strictly a blues, it nonetheless embodies the energy and emotion that the blues has brought to American music. The title track, “Give ‘Em Some” is an extremely intricate chord progression supported by a strong and funky groove. Tony Moreno’s astonishing final drum solo distills technique and passion into a crescendo of excitement. “Smoke” journeys into the bluesy wah-wah land of Jimi Hendrix, the great artist and innovator, whose influence lurks in the playing of all electric guitarists. “Time Line” is an extended rock ballad reminiscent of Jeff Beck, another guitar icon. Along with delving into the richness of 12 tone harmonies the tune also explores the time relationships of 4 against 3 and metric modulation. “Techtonic” is reminiscent of Bruce’s early work with a deep harmonic palette, contrapuntal lines and interesting 12 tone vamps. “Rush” is a pastiche of groove and a gamut of evocative electronic guitar sounds with bookends of effects processed solo work. “Funky Timeline Breakdown” uses the bass line from “Time Line” as a vehicle for soloing “I loved soloing over that one!” says Bruce.

“The best records are those that provide you with multi-level, multi-sensory pleasure. What would the world be, after all, without all those Steely Dan records where you feel the music, engage in its complexity, smile at the words and taste small doses of heaven? Of course, at any given time, you can turn off one of those reactions. You don’t have to think about wide intervals and altered chords and unusual harmonies all the time. And you shouldn’t have to. Listening to music, after all, shouldn’t be like Trigonometry.

Give ‘Em Some, from guitarist/composer Bruce Arnold, has all its egg-head sensibilities in check. Arnold, who composes 12-tone music (Crudely: You’ve got to use all twelve notes in the chromatic scale before you can repeat the first), music that, when done poorly, makes some scratch their heads and say, “Does he know how to play that thing?” and makes it listenable to nth degree. (Provided, of course, that you like fusion a la Jeff Beck during the Wired/Blow By Blow era, Larry Coryell and avant guardians Carla Bley and Michael Mantler exercising restraint.)

Although the average listener on the street (someone who, say, is enamored with simple harmonic structures and bite-sized morsels of song — the majority of music listeners, some might argue) will probably retract from the more aggressive explorations here, those who have even a passing acquaintance with jazz, fusion or balls-out progressive rock will love Give ‘Em Some. (And, if you’re simply one who likes to explore new styles, this might be a good gateway album to the frightening, dimly-lit world of experimental jazz ecstasy.) Get some.”
—Jedd Beaudoin, Magazine F5 AltFlesh

Guitar-led jazz trios rarely excite me, but Arnold manages to be technically brilliant and emotionally explosive all at once. Unlike guitar hero albums which seem to do things the other way around. Arnold imbues this set with introspective style.
—Aiding & Abetting

With Give ’Em Some, guitarist Bruce Arnold continues to wring surprisingly varied and melodic results from 12-tone compositional methods, following up on what he began with 2000’s A Few Dozen. The same lineup—bassist Ratzo B. Harris, drummer Tony Moreno—appears here, but Arnold pointedly goes for a more rock- and funk-oriented sound this time. He tends to set up his alluringly dissonant harmonic patterns with a clean sound, only to solo with all-out distortion, wah effects, and sui generis sounds called forth from the synth pickup on his Fender Strat. Harris plays both acoustic and electric bass with aplomb. The disc begins with the Schoenberg -dedicated “Blues for Arnie” and rocks hard through the next two cuts before relenting with the more ethereal “Techtonic” and “Timeline.” The latter segues into a funky breakdown toward the end, a groove based on a five-bar phrase that the band reprises on the final track, aptly titled “Foggy Timeline Breakdown.” Moreno steps out front on the abstract “Rush,” setting rolling tom-toms and percussion against Arnold’s harmonized, chorusy ruminations. This music demonstrates something Schoenberg and his followers couldn’t have foreseen: that serialism has applications beyond the concert hall and may even be of use to a guitar power trio.
—David R. Adler, AMG EXPERT REVIEW

Bruce Arnold – GIVE ‘EM SOME: A trio featuring Bruce’s fantastic guitar works (along with Ratso B. Harris on bass & Tony Moreno on drums/percz). Images of late ’70′s rockfests come to (my) mind’s ears, & it seems I am transported back to a (sorta’) golden era of music (tho’ only us hippies remember how “golden” it was, I s’pose). This is actually one of the better jazz/rock/fusion albums I’ve listened to in (let’s say) the last 10 years. Something interesting occurs after you’ve listened through it for the 2nd or 3rd time, though… it becomes clear that though much sounds familiar (as in McLaughlin/Mahavishnu), this is new energy… no kopykat stuff, no rehash! Yummy stuff that sticks to yer’ ribs, a real musical treat! Arnold’s solo work is a highlight, to be sure, but all 3 players have the green light on, & are in high gear (energy-wise) on all 7 compositions… even the ones that are slower paced! From a “classification” standpoint, this is nearly impossible… it doesn’t fit neatly in any pigeonhole… elements of fusion, to be sure… plenty of jazz/blues leanings… but what shines through is that it is original playing! Anyone with a taste for well-crafted music will groove with this – and agree with me when I declare it MOST HIGHLY RECOMMENDED… as well as the “PICK” of this issue for “most enjoyable music”!
—Dick Metcalf, IMPROVIJAZZATION NATION

GIVE ‘EM SOME! features the guitar jazz expressions of Bruce Arnold with an infusion of funk tempos, accompanied by the sounds Ratzo B. Harris on acoustic and electric bass and Tony Moreno on drums and percussion. The song, “Give ‘Em Some” is a nice jazz motif of sound and delivers a topnotch performance from the trio in its running time of 7:28 minutes. “Funky Timeline Breakdown” will surprise and delight listeners, as will “Rush.”
Bruce Arnold uses his guitar to explore twelve-tone structures and he is a master of the art form. Six long and entertaining songs make up the CD collection. The jazz audience will find the jazz motifs unusual, and interesting. For a change of pace, give this gifted guitarist Bruce Arnold a listen, and discover some new guitar licks of an imaginative nature in GIVE ‘EM SOME! Nice, solid, imaginative trio work.
—Lee Prosser, JazzReview.com