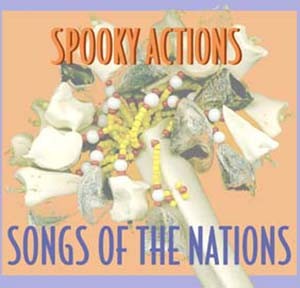 Songs of the Nations Volume One

ALL PROFITS FROM THIS RECORDING TO GO TO NATIVE AMERICAN CHARITIES.

Muse-Eek Publishing Company is proud to announce the release of the latest project by jazz group Spooky Actions. In “Songs of the Nations,” melodies from the Sioux, Arapaho, Zuni, Teton Sioux, Chippewa and Cheyenne nations are given spare and sensitive arrangements that bring out their singular beauty.

The origins of "Spooky Actions"

Spooky Actions (Bruce Arnold, guitar and John Gunther, winds) derives its name from how Albert Einstein described the way particles separated by great distances could still exert effects upon each other. The group demonstrated this concept in its debut CD “Spooky Actions, Music of Anton Webern.” Of their ability to interpret and improvise over that composer’s highly distilled palette, the critics said:

What the Critics are saying about "Spooky Actions"

“...they address Webern’s music on its own terms and shed new light on its strange beauty” JAZZ TIMES
“Spooky Actions has plumbed the goldfish bowl of Anton Webern’s works and found pearls.” DOWNBEAT

“...though there are few brave enough to tackle Webern ... they navigate the transition between score and improvisation adroitly. A fascinating experiment.” CADENCE

Spooky Actions has now turned its attention to Native American music and a fresh and subtle synthesis has arisen from the group’s efforts with these simple but lovely melodies. Drummer Kirk Driscoll has built rhythmic settings based on the linguistic cadences of each song, and Bruce Arnold has drawn on an array of atmospheric sounds and guitaristic riffs to complement them. Gunther’s expressive saxophone and flute musings add exactly the right amount of melodic support to baritone Thomas Buckner’s inspired readings. Highlights are the opening “Dog Feast” with its upbeat and catchy refrain. The CD then transitions into the airy “Ghost Dance” with Arnold providing shimmering effects. John Gunther gets to shine on the only instrumental, “Behold the Dawn” and the cyclical Chippewa lullaby. And although most Native American music is perceived as relentlessly pentatonic, the stunning Zuni lullaby that closes out the set defies cliche, and could just as easily have been penned by George Gershwin.

“It started with one song,” says Bruce Arnold. “But as we worked together we all realized that Native Americans had affected our lives profoundly. Most obviously, Thomas is married to a woman who is half Mohawk, and so he attends powwows regularly. We found out later that Kirk is part Cherokee. John and I both grew up in areas that had significant Native populations - John in Colorado, and myself in South Dakota ... and we had pretty vivid memories of how bad things were for them. So when the CD was done, we knew it just wouldn’t be right to make money off their music.

Muse-Eek Publishing has selected the SuAnne Big Crow Memorial Foundation to be the recipient of all profits derived from the sale of the CD.

Get Songs of the Nations Volume One...today!