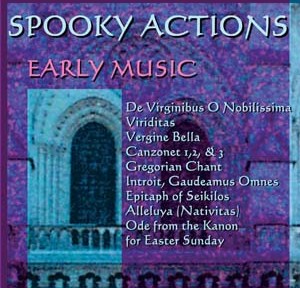 "I've often thought of music as a vessel of the human spirit, a message in a bottle that can travel across an ocean of time, and deliver a "note" from Bach, or Charlie Parker." So writes John Gunther in his essay for this latest excursion by Spooky Actions, the band that has taken on modern interpretations of music as disparate as Native American song and the Canons of Anton Webern.

"Perhaps embedded in the intervals and sequences of the melody and rhythm are the thoughts and emotions of the composers themselves" he continues. Thus he states the raison d'être for Spooky Actions, and its continued mining of diverse repertoire for examination and re-interpretation. (The name Spooky Actions is derived from a comment by Albert Einstein, in which he noted that certain seemingly unrelated objects could nevertheless exert a powerful influence upon each other. He called these relationships "spooky actions.")

Spooky Actions the band, is John Gunther (winds) and Bruce Arnold (electric processed guitar). The two musicians who both teach at New York University met, jammed and felt an immediate musical affinity. When Gunther started bringing in both early and modern classical music to improvise over, they were inspired to start making their own transcriptions, and to create a series of recording projects. Their first release, "Spooky Actions; Music of Anton Webern" was an informed and sensitive inquiry into the muted palette of Webern. Critics wrote: "....they address Webern's music on its own terms and shed new light on its strange beauty. (Jazz Times) and "Adapting music of this complexity, written for ensembles of highly different instrumentation, is not the easiest thing in the world to do. Luckily, these players are up to the task." (Cadence)

Their next project "Songs of the Nations" found them immersing themselves in Native American melodies. Again, their respectful approach produced a memorable CD: "Spooky Actions" made sure that their additions stayed far enough back in the mix that the listener is still wrapped in the Native American experience" (Improvijazznation)

The group (currently including Kirk Driscoll on drums and percussion, and Mike Richmond on Bass and Cello) now turns its attention to a selection of beautiful Early Music. Arnold's guitar, processed through the object-oriented computer program SuperCollider, creates an atmospheric and luminous matrix in which Gunther's playing (soprano and tenor sax, flute and bass clarinet) by turns ruminates and soars. Both Driscoll and Richmond demonstrate what great musical interaction is all about.

The repertoire covers a wide swath of time, including as it does the "Skolion of Seikilos," one of the earliest examples of written music, from the 2nd century BC, to the "Canzonet 1,2, & 3" of Claudio Monteverdi (1567-1643). Other pieces are "De Virginibus O Nobilissima Viriditas" by Hildegard Von Bingen (1098-1179), "Vergine Bella" by Guillaume Dufay (1397-1474), a Gregorian Chant, "Alleluya (Nativitas) by Perotin (c. 1200) and "Ode from the Kanon for Easter Sunday" a Byzantine Chant from the 8th Century AD.

Message in a Bottle

The result is a CD that can comfort, transport and inspire the listener. And while that is not surprising, since this music was originally designed to do exactly that, what is astonishing is that Spooky Actions has done it again--examined the essence of a piece of music, and made it their own, without removing its heart or intent. As Gunther concludes: "We bring them into the present and frame them with our own life experiences. And so we place the message back in the bottle, and cast it back into the deep."