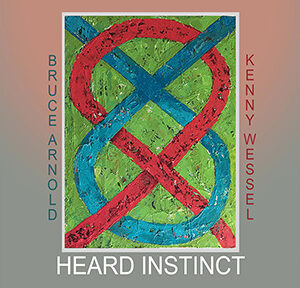 Take two strongly stylized guitarist/composers and put them together in a room, and you risk an uncomfortable confrontation of musical personalities. But not so with Bruce Arnold and Kenny Wessel. Though each musician brings a formidable resumé coupled with a reputation for originality, the result is a tribute to duet performance. The purpose, after all is to make good music; tuning in to the other, and anticipating, following and leading. That’s what it all about, and the pathways tread by these two lead to music that is not only entertaining, but challenging. You can relax into it, but somewhere in there, you can count on some adventure; a harmonic structure that is unexpected, or a melody that doesn’t quite go where you thought it would. These are the kinds of encounters that we look forward to, that stimulate our senses, and become the reasons we play an album again and again.

The opening track “Three and Fro” is by far the most angular of the set, and showcases a singular facet of Bruce Arnold’s compositional style: deceptive simplicity. The motif is very sparse, and yet the harmonic implications and rhythmic structure are quite complex. Wessel gracefully meets the challenge of this demanding composition, and the two guitarists create a fascinating braid of moving notes.

The rest of the CD is smooth sailing; Kenny Wessel’s “Pete’s Mistake” is quite jaunty despite its minor key, with a playful “trading fours” section. Back to Arnold, with a gorgeous ballad, “Heard Instinct” again displaying simplicity, but this time in the service of a haunting melody. “Unstrung” by Wessel is a lilting, swinging number that shows off the soloing and comping chops of the duo, as well as their ability to twine single note solos together, on the ride-out. Arnold’s medium tempo “Once” has one of those melodies that feels like an old friend as soon as you hear it; it’s a great song for stretching out, and they do. “Sunset” is Kenny Wessel’s musical reverie; a peaceful, leisurely paced interlude that calms the senses …until the very end, with its flurry of energy, as if it’s time to stop watching the sunset, and get going… with just one last lingering look before we leave. “Somewhat Likely,” another Wessel composition slides along smoothly with an original melody written over the changes to “Like Someone in Love.” The set closes out with Bruce Arnold’s blues, “Dakota Gumbo” a slinky bit of midwestern fun. If a tune could wink, this one would!

Do You Want to Learn More about Kenny Wessel and Bruce Arnold?