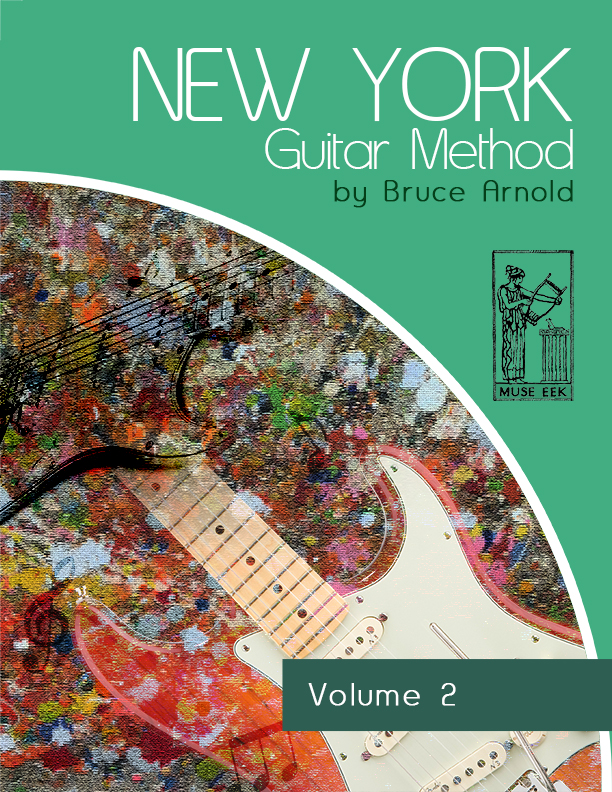 The 24 chapters of New York Guitar Method Volume Two cover all aspects of using this more advanced way of playing called approach notes. It gives you a way to organize how you practice them, but it doesn’t stop there. It gives you all the fingerings for 13 different arpeggios in 4 positions on the guitar. It includes all the upper four string chord voicings so you can bring your funk, R + B, and jazz chord playing to another level. It also demystifies Passing Diminished scales and gives you a detailed list of how chords and scales interact. A Chord Reharmonization is also included to show you how you can change chord progressions to make them more interesting and dynamic. A must own for any guitarist that wants to understand the advanced knowledge that most progressive rock, fusion and jazz players possess.

Jazz, Rock R & B and Fusion guitar players all use the upper four string chord voicings. Ever wonder how jazz players play those chord solos or what chords James Brown’s guitarist uses to get those funky grooves? Well, it’s all the upper four string voicings; something any serious guitarist needs to know. New York Guitar Method Volume Two gives you a highly organized system to learn these chords.

The following chords are covered:

Learn an arpeggio method that covers the entire fretboard

The following Arpeggios are covered:

Learn all the practical ways approach notes can be used.

The following applications of Approach Notes are covered:

New York Guitar Method Volume Two is an unmatched series of books covering all the things you need to become a world class guitarist.

By combining both theoretical and practical application, this series of books gives you everything you need to become a great guitarist. Get a comprehensive education by working through the entire New York Guitar Method series.

Whether you are a total beginner or an advanced guitarist there is a book in this series that is perfect for you. GET STARTED TODAY!

Recommended books to use with New York Guitar Volume Two

What should I work on after New York Guitar Method Volume Two?

Have a story or a review you want to submit. We would love to hear from you please send us an email.