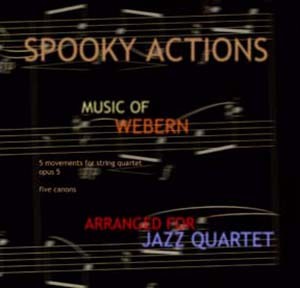 A new take on Webern's Music

When Anton Webern was composing his Five Canons on Latin Texts, he probably wasn't thinking very much about American improvised music. Yet formal harmonic structure is the original essential European contribution to the character of jazz. And while much of the mainstream of jazz repertoire is still mired in the harmonic concepts of Tin Pan Alley, Spooky Actions, a New York based jazz quartet, have found inspiration in the discipline and muted palette of twelve tone music.

In their debut CD "Spooky Actions, Music of Anton Webern" the quartet plays through note for note transcriptions of the Five Canons op. 16, as well as the Five Movements for String Quartet, op 5. They then improvise over the pieces. Rather than taking extended solos, the ensemble uses a sensitive and informed interaction to create original music based closely on the spirit and form of the written work.

It is astonishing to discover how suited the sonorities of the jazz quartet of drums, saxophone (and flute), electric guitar and bass are for 12-tone music. Indeed, the ears of listeners accustomed to these sounds will find that they are a kind of Rosetta stone; the pristine, compressed structures of Webern's music take on new clarity and attractiveness, making for extremely accessible listening.

The origins of "Spooky Actions"

The band's name comes from the phrase "spooky actions at a distance." This was how Albert Einstein described the phenomenon of two seemingly unconnected, disparate objects that nonetheless exert a powerful influence on one another. Spooky Actions, the band, certainly personifies this concept, showing how vivid improvisations can be derived from music that is often thought of as "etched in stone."

Excerpts from 5 Movements for String Quartet: