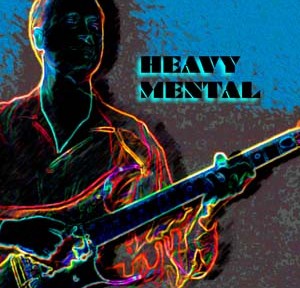 Bill Milkowski says it better than we can:

“The outcome of this inventive trio session is a fresh amalgam of visceral rock bombast, jazzy harmonies and cutting edge sonics, the likes of which haven’t been heard since Terje Rypdal’s wildly experimental mid ‘80s power trio, The Chasers. His 28th release overall, “Heavy Mental” is easily Arnold’s most hard-hitting and audacious outing to date”

In 2001 Bruce Arnold came out with “Give ‘Em Some” a jazz-rock n’ funk blast that had critics writing “… a CD of music that is both muscular and intellectual…” “…Arnold manages to be technically brilliant and emotionally explosive all at once,” and “…one of the better jazz/rock/fusion albums I’ve listened to in (let’s say) the last 10 years.” *

Now Arnold comes roaring back with Heavy Mental, another return to his love of all-out electric guitar-driven, distortion drenched, high octane music. But as with all of Arnold’s ventures, this is music with an intellectual backbone. Arnold brings to bear all his investigations into 12-tone theory, hexatonics, and sound collage (Using SuperCollider) and together with Andy Galore on Bass and drummer Kirk Driscoll creates a powerful and mature musical statement that satisfies on every level.

In the 9 years since Arnold’s ground breaking “Give ‘Em Some” he has immersed himself in a plethora of differing genres. From exhilarating jazz adaptations of 20th century classical masters, to straight-ahead-with-a-twist jazz duets, Arnold has relentlessly pursued his passion for musical innovation. Heavy Mental comes full circle in a sense, as he returns to his rock roots, bringing along a rucksack of theoretical constructs, all of which have been thoroughly explored. Sit back, turn up the volume and get ready for some serious musical stimulation.

“Heavy Mental features the guitarist in a more modern, rock influenced setting than most would expect from a jazz guitarist. But, Arnold’s deep level of musicianship and musicality rise to the top of every song, allowing him to perform in any genre that he pleases without the risk of “selling out” as some artists have done in the past.”“Heady stuff it is, but proof that the blues not only can take experimentation, it demands it. And Bruce (Almighty) Arnold is the man to take it beyond bounds.” Matt Warnock Guitar International