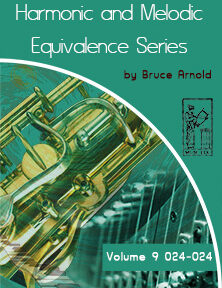 This course works with a trichord pair consisting of a two 024 pitch class sets. Two trichords, unlike a two triad pair, are not build in thirds. Two 024 trichords give you are very modern sound and are a particularly beautiful sound that is very useful as a replacement for a major or minor chord. You can pivot back and forth between these trichords in various ways and this course gives you 328 pages of exercises in all keys with MP3 and Midi files to do just that. Harmonic and Melodic Equivalence V9 Trichord Pair also contains examples of how you could use these two trichords in extended harmonic reharmonizations. These aspects make this the definitive study of this two trichord pair.

Background Information on a Two Triad Pair or Two Trichords

"Harmonic and Melodic Equivalence Trichord Pair" is a series of books that will help you to develop many different musical skills simultaneously. The source materials for this book are exercises that contain two 3 note groupings which are not built in thirds. First a little background, "two triad pairs" consist of two 3 note groupings that are built in 3rds. These combinations typically use a major, minor, diminished or augmented triad and when grouped into a collection of two are called a "two triad pair."

A trichord pair on the other hand takes any of the 9 other possible 3 note combinations and builds pairs using these pitch class sets. These include 012, 013, 014, 015, 016, 024, 025, 026 and 027. Any three note group can be referred to as a "trichord" but is more commonly used when speaking of a three note grouping not built in thirds.  Trichords can also be referred to as non-tertial two triad pairs.

The exercises found in this course use many different types of harmonic and melodic ideas that can be superimposed over common chord progressions, scales and other musical situations. This course concentrates on using a two 024 pitch class sets. An example of that would be C, D, E and G, A, B. There are many ways to think about this six note grouping but one of the common ways is to think of it as six notes from a C Major scale minus the 4th. This makes this combination a great resource for applying to any scale or chord found within the Ionian modes. Charts are included to show you how these notes function in all 12 keys as well as many other charts showing other distinctions found within this two triad combination.

The two trichord books are pretty unique to the Muse Eek Publishing Inc. catalog. The various non-tertial two triad pairs found in this collection are both beautiful and highly applicable to modern improvisation. They work well as a melodic and harmonic device and Mr. Arnold has written a body of work through both recordings, videos and books dedicated to these non-tertial combinations. As with all of Mr. Arnold's books there is a sharp focus on the ear training and the "Harmonic and Melodic Equivalence Two Trichord" Series is no different. Each exercise or chart is always relating back to the idea of how you would hear these notes within a key center. This book includes a section where the two trichord pair are put into common chord progressions but more importantly shows you how these progressions relate to the overall key center. Learning music based on how your hear it rather than relating everything to a chord by chord approach is the rosetta stone of music. This is the secret to the previously undecipherable mystery of understanding music from an aural perspective.

This course is part of the Harmonic and Melodic Equivalence Series which explores over 50 different either trichord pairs or two triad pairs. To see all volumes follow the link above to explore each volume and hear examples from each course as well as finding links to compositions that I've written using each combination.

This course is divided up into two sets of exercises written in treble and bass clef. The 1st set of exercises gets gradually harder but also more musical. Depending upon your musical skills you can start anywhere you want but for beginners I would recommend starting from the 1st exercise of the five. The 2nd set of exercises are called "Atomic Scales." These exercises are a technical exercise that really helps you to learn these ideas but also sound great as a melody right off the bat. There are 6 different types of "Atomic Scales" exercises in this course. You don't have to play every exercise in every key. But doing this will greatly increase the likelihood of you using it in real music in the future. Below is a listing of the exercises found in this course:

Below is an explanation for each set of the 6 different atomic scale exercises found in this course. Three octave sequences that move back and forth between the two 3 note groups are presented in six different configurations. These exercises are highly melodic and can be used verbatim as melodies when soloing. If we thought of the three notes as A,B,C then there would be six different ways to combine these notes. i.e. ABC, ACB, BAC, BCA, CAB and CBA. All exercises include MP3s as well as midi files so that you can hear and play these exercises at any tempo as well as versions in all 12 keys.

Here are a few examples from the 1st set of exercises. A complete list of the different types of exercises can also be found below.

Random combinations of closed position along with 1st and 2nd inversion.

Here are a few examples from the 2nd set of exercises.

Hey Bruce, just got to tell you that these two 024s are such a beautiful and simple combination! I've been playing them as as chords and melodies and they are simply gorgeous. The idea of superimposing the two 024s as a bII∆7 chord is something I'm using immediately and quickly realizing that this is a sound that many advanced improvisers use. Thanks again for opening my eyes to a new world of sound. By the way, I really enjoy the 024 Alap Video from the "Cloudwalking" CD. A great of example of the beauty of this combination. J. Ogland

Hey Museekers, Really digging this 024 stuff. Never dealt with the pitch class set side of things but you make it so easy to just work with the material and don't just concentrate on the theory side of things. Appreciate that because I'm not big on theory I'm more into getting different sounds into my playing. I think Bruce is coming from the same place from reading through his practice recommendations. I'm pretty much just reading a few measure of the exercises and then I'm off to applying that to real music. Thanks for sharing all your knowledge and patiently answering all my pesky emails :) J. Lawrence

Just wanted to let you know that I greatly appreciate all these two trichord books. It is very hard to find information on the web about these combinations and man are they cool! It is odd that there is so little coverage of this on the net. But I guess it's like what you said in your email, Your Approach Note Course is another example of an improvisational concept that no one but yourself has written a full blown course to cover this important subject. Anyway, keep'em coming, I really cherish your insights on these subjects. A. Connelly

These 024s are the bomb! What I dig about trichords is I can put them directly into my rock music writing and they sound fresh and interesting. 024 are best for ballads with an acoustic guitar where I'm playing the 024s as chords. Sweet stuff! Thanks J. Edwards