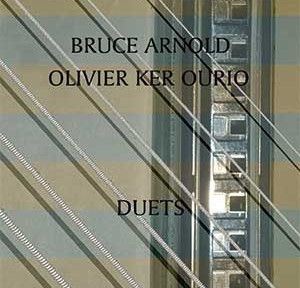 Music festivals bring musicians from all over the world together, and wonderful projects evolve from these meetings. When harmonica virtuoso Olivier Ker Ourio (France) met electric guitarist Bruce Arnold (USA) at an international jazz festival in Monterrey Mexico they both felt a strong musical kinship. Olivier visited the USA a few months later, and he and Bruce took time to create a CD’s worth of duets based on Bruce’s compositions simply entitled “Duets”

A transformation occurs when any piece of music originally arranged for several instruments is condensed into the duet form. In this case, the sweet and wistful timbre of Olivier’s harmonica lends a warm familiarity to even the most angular of Arnold’s compositions. Arnold, who is known for his fiery excursions into the land of twelve-tone soloing is content to be the bedrock here, holding down harmony and grooves while Ker Ourio swoops and glides with the melodies.

Olivier Ker Ourio is one of France’s greatest jazz harmonica players. He has recorded and toured with France’s top jazz musicians, and created his own CDs to great critical acclaim. But his is a divided nationality–born in France but raised on the island of Reunion, he has returned again and again to this place that was his formative home. His CD “Sominnkér” was a collaboration with Daniel Waro, the island’s great maloya vocalist and was immediately recognized as an important cross-cultural work. He continually tours and records for CDs, television, films, and to appear on radio and television programs in France.

Bruce Arnold has been working with twelve-tone music for the past ten years persistently refining and developing its application to modern jazz composition and improvisation. The LA Times said “Arnold deserves credit for his effort to expand the jazz palette” and his three CDs (“Blue Eleven” “A Few Dozen” and “Give ‘Em Some”) have all received universal praise from both jazz and classical circles. Mr. Arnold divides his time between composing and performing as well as writing books for music education.