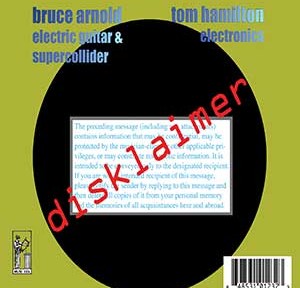 “Disklaimer” finds guitarist Bruce Arnold practicing alchemy with master electronic improviser and synth keyboardist Tom Hamilton. The two have been friends in music together for ten years, and the interaction displayed in this CD of soundscapes highlights that familiarity.

Tom Hamilton is no stranger to anyone interested in the American New Music scene; his contributions as a player, composer, sound engineer, installation artist and curator have extended his reputation as a pioneer, one with an exacting ear and an open mind. Rather than addressing traditional modes of expression, presentation and observation, Hamilton’s music often explores the interaction of many simultaneous layers of activity, prompting the use of “present-time listening” on the part of both performer and listener. ”

Bruce Arnold is best known for his applications of 12 tone constructs to modern Jazz composition and improvisation. His most recent forays however, have been in the use of SuperCollider, an object oriented computer program that allows remarkable flexibility with processed sounds on the guitar. This expanded textural spectrum coupled with Arnold’s fascination with tonalities and structure makes for an excellent synergy with Hamilton.

On “Disklaimer” these affinities are sometimes so in synch that the listener will be challenged to separate one musician’s contribution from the other. (Hamilton plays Nord and Kurzweil keyboards, while Arnold’s guitar is processed through SuperCollider.) Sounds, movements, rhythms and ideas interact spontaneously yet structurally, lending each track the feeling of a composition. Arnold states that he used the tonal centers of Hamilton’s seemingly atonal playing to create an harmonic and melodic palette thus giving the improvisations a feeling of tonal form. Throughout, the communication between Hamilton and Arnold results in tracks that are both thought provoking and ear pleasing.