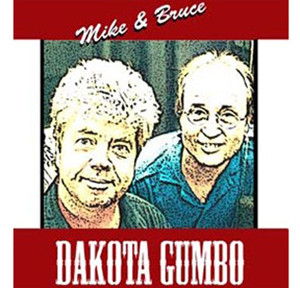 Mike Miller and Bruce Arnold cook up some blues duets

The guys from Sioux Falls are back with another set of telepathic duets. Their
first effort (Two Guys from South Dakota) was described as “straightahead, uncluttered, and unpretentious; warm, inventive, and above all, solidly swinging” in All About Jazz. The same holds true for this recording where the guys stretch out with a selection of blues based tunes.

In the liner notes for “Two Guys from South Dakota” Bruce wrote:

“One wouldn’t think that the backwaters of South Dakota would be a place for artistic expression…. But going against the grain were musicians like Mike Miller, and a host of others whose musical level was equal to anyone in the world. I was incredibly lucky to be around these musicians during my formative years, and to hear them play….Further down the road I connected with Mike during his frequent travels through New York City. Mike was gracious with his limited time and agreed to get together to play in the privacy of my apartment. It was so affirmative for me to connect again with such a wonderful musician; to enjoy his love for making music combined with the humor and wit that have always been part of his playing. There are few things that make me as happy as sitting in a room with another guitar player and just making music. No ego, no agenda — just a need to interact and make music.”

This kind of basic musical sincerity shines through “Dakota Gumbo.” The CD is warmed by the unprocessed sounds of two electric guitars, and an uncommonly sympathetic pairing of musicians.

Bruce makes good use of the flavor created by of a 1/2 step and minor 3rd via a hexatonic scale in most of the tunes, like Dakota Gumbo, Lock and Key, Multiplicity and Woodpecker Blues, but there’s a down home twanginess to the overall sound of the CD that Bruce says “reminds me of our old jam sessions back home.”