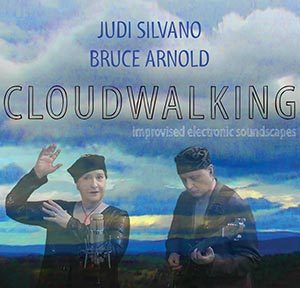 "The definitive breakdown of musical categorization was delivered in 1962 by Duke Ellington: “There are simply two kinds of music, good music and the other kind.” File this album in the Good Music section."

“This is some Beautiful Cosmic Music created by two of the most inventive musicians on the scene today.”

"Brilliant. Love it; almost a Kraftwerk twist to it."

JUDI SILVANO and BRUCE ARNOLD - Cloudwalking (Muse Eek 304; USA) Featuring Judi Silvano on vocals & effects and Bruce Arnold on guitars & effects. This is the second disc from Judi Silvano and Bruce Arnold. To call Ms. Silvano just a jazz singer would be misleading since, as this disc shows, there is quite a bit more going on here than one might imagine. We can still hear her jazz background but she is still stepping into another world, rather mysterious sounding. Her voice on “Ingenue” is lovely, warm, dreamy sounds without words. Mr. Arnold also plays solemn, spacy echoplex guitar chords underneath. Ms. Silvano selectively uses an ample amount of echo effects to expand the sound of her voice. The effects that both musicians use are similar in the way they pulsate and work well together. The effects that Mr. Arnold uses add a hypnotic groove at times upon which Mr. Silvano lets her voice glide, rhythmically, tastefully. There is some magic spice going on here, a rather soothing, dream-like vibe that feels better that some of the more aggravating nonsense we all have to deal with at times. Is this music for a fairy tale or a quaint movie for our minds when we are mellowing out? I like when the voices lays out for a bit while Mr. Arnold creates enchanting scenes from different short stories or chapters in a novel. This gives Ms. Silvano a chance to add her own part of the story, her creating different characters. Since there are no lyrics to think about, it is only the sound of her voice to evoke different feelings. Overall, I find this disc to be rather charming and not too far out, but enough to take us all on a magic carpet ride upwards and onwards. This duo will be playing here at DMG early next year, so keep you eyes & ears peeled.

After the warm reception of their maiden voyage, Listen To This, (“This disc is the gem of the month!”…Bruce Gallanter, Downtown Music Gallery, NYC) the duo of Judi Silvano and Bruce Arnold present their second release of improvised electronic music, "Cloudwalking". While their first effort showed them exploring their musical connections, and reflected an all encompassing approach, "Cloudwalking" is a much more intentionally lyrical outing. It contains evocative electronic soundscapes and haunting melodies. It is atmospheric without being ambient.

All the tracks are completely improvised, yet they all sound composed, with thematic arcs, repeating motifs and intuitive endings. This stems from both of the musicians having a long history of composition, and an affinity for the same music. There is an equal give and take throughout these tracks, with neither Judi nor Bruce dominating the direction. Videographer Michal Shapiro, who shot the sessions, remarks, “Bruce may start off with a chord, or a sound or even a melodic figure, and Judi listens, interacts, and then before you know it, they are creating a beautiful song. Or sometimes Judi just starts singing and Bruce jumps right on it. But it amazes me that they come out the other end with these deep, cohesive musical pieces.”

The two musicians only met a relatively short while ago. Both traveled in the same circles, and made music with the same musicians, but had never met. A chance recommendation from bass player Ratzo B. Harris connected them on a gig, and the rest followed naturally.

Judi may be best known for her extensive jazz catalogue (too extensive to list here) but in reality, she is a multi-faceted artist, having grown up with classical, pop and jazz music, and been trained as a classical singer. Her affinities for modern classical music are apparent throughout this album, most notably on the opening track “Ingenue” with its sweet, almost bel canto tones.

Bruce Arnold has been following two different paths for the past ten years: Exploring the potentials of 12-tone music and pitch class sets, and mastering the computer program SuperCollider, to create new and original electric sounds on guitar. On their first session, Bruce notes “I set up an array of pedals, each one programmed to process Judi’s voice in a different way. She assessed the possibilities and immediately started to savor each sound and use the effects creatively.”

The Equipment Used by Sonic Twist® on this Recording

This CD used extensive live audio processing of the voice and guitar. Below is a list of the equipment used:

To find out more about Judi Silvano or Bruce Arnold please visit their websites.