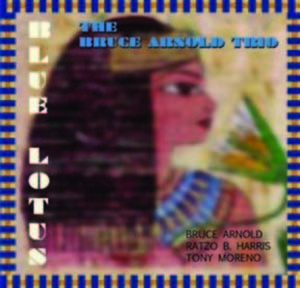 Guitarist and composer Bruce Arnold continues his journey into serial based, hexatonic composition and improvisation with five brilliant pieces for jazz trio, on Blue Lotus (MSK 130). Jazz and free improv greats Ratzo B. Harris on bass and Tony Moreno on drums round out the ensemble. These musicians have been working as a trio for fifteen years, and it shows, from the cohesion of the sound, to flashes of improvisational brilliance. The CD is named for one of the tracks, of which Mr. Arnold writes:

I first encountered a blue lotus during a walk-through of the Egyptian wing of the Metropolitan Museum here in New York. According to our guide the Ancient Egyptians had a special feeling for the flower and portraits of goddesses and royal women inhaling the blue lotus date to the beginning of Egyptian history. Not only did it symbolize the rising and setting of the sun—it also had an aroma that was said to be mildly transporting and putting the petals into wine enhanced the feeling. The idea of a blue lotus that operated on a variety of levels intrigued me, and I wrote a highly structured piece and named it for the flower. Most of the other tracks on this CD could be called petals of that same flower, as they spin out of the basic structural ideas* presented more formally in Blue Lotus.
”

These ideas are part of a versatile system that can be used to create formal compositions
or used in a free improvisational setting, both of which are demonstrated on this CD. And they are equally applicable to traditional jazz oriented music as can be seen in Mr. Arnold’s approach to the duet he played with Stanley Clarke when he received his lifetime achievement award from Bass Player Magazine. (for a link to this performance go to: brucearnold.com