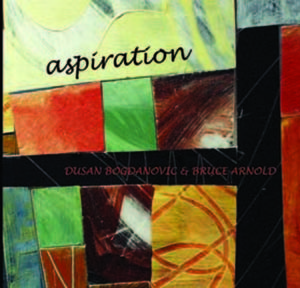 The improvised duet is a singularly revealing format. Two players enter into a temporary relationship, bonding on the most profound levels of intellectual curiosity and risk taking. Technical and artistic facility is a given. Trust is essential. In “Aspiration” two virtuosos enter into that relationship and give us 18 short pieces, filled with delicacy and darkness, ambience and adventure.

Both musicians are accomplished in their own right, with an impressive list of accomplishments and critical praise. Both have played with the best in the field. Both are considered innovators. Upon meeting they immediately sensed affinities, and decided to document several sessions. The only structure agreed upon was that the pieces would be brief. Close listening reveals the degree to which these two guitarists are able to express themselves on their instruments and to communicate with each other at lightening speed.

But no matter how accomplished the artist, there is always another level of achievement to strive for. The music on “Aspiration” quite literally breaks new ground; documenting an aesthetic adventure from medieval sounds to the intricacies of cutting edge contemporary jazz and classical music. Bruce Arnold and Dusan Bogdanovic here aspire and conspire to meet the challenge of creating spontaneous and breathing musical spaces.