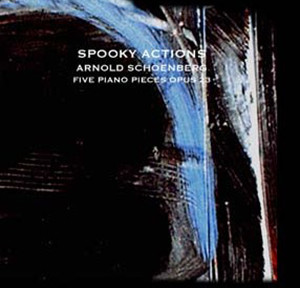 Arnold Schoenberg’s five pieces for piano, brief as they may be, are considered to be milestones in the composer’s development of his innovative 12 Tone theories. Opus 23, like much of Schoenberg’s music, is highly organized with intricate rhythms, angular lines and dense harmonies. The jazz quartet Spooky Actions presents these pieces meticulously transcribed and improvised over, on “Spooky Actions/Arnold Schoenberg Five Pieces for Piano Opus 23” (MSK 142). Herein the band continues in its tradition of incorporating music from other genres into the jazz sensibility in order to examine new sounds and improvisational directions.

The result is a startlingly fresh sound, one that is accessible perhaps due in part to the way modern jazz has opened the ears of a generation of listeners to new timbres and structures. That the band can improvise over these complexities is a tribute to their musicianship and their respect for their source material. (They tend to improvise so faithfully to their source’s constructions that one critic, who shall remain nameless, once disparaged the band for not improvising when of course, they were!)

John Gunther, who did the lion’s share of transcription and arranging, best describes the process of creating the CD in his eloquent liner notes:

Adapting and performing Opus 23 to jazz quartet presented unique challenges. The extreme range of low and high notes on the piano had to be re-distributed among guitar, sax, and bass. The number of notes that could be played at one time – ten fingers, ten notes on the piano – also had to be accommodated in some novel ways, mostly by Bruce (guitar) as Spooky Actions has basically 7 or 8 fingers or notes that can sound at one time. Despite these challenges and with very few exceptions, we play all the notes in Schoenberg’s score. Tony Moreno had the biggest challenge in creating a concept for playing drums with this music – something for which there is no precedent.

Each movement of the composition is followed by an improvisation in which we utilize the musical elements of the movement we just played, such as quoting directly from the 12-tone row or fragments thereof.   In addition, there are small bits of each movement that are expanded upon to give the ensemble a framework to improvise within.

In the first improvisation, the group improvises off of segments of the row and returns to the composition as a sort of Coda

The second improvisation is done over a repetition of the last 8 measures of the 2nd movement. The last measure forms a sort of riff or musical landing point.

The third improvisation features an extended drum solo that leads into a repetition of the 5th measure of movement 3, and then a restatement of measures 2-4 by the bass and guitar.   By isolating and repeating one measure of the original composition, some fascinating harmonies are brought to the fore.

Improvisation 4 begins with a rubato bass improvisation that leads into an ostinato based on the second to last measure of movement 4.   The 9-note motive is played once and then immediately in reverse forming a two-measure ostinato.

Improvisation 5, is again based on measures from the preceding movement 5.   The melody, somewhat uncharacteristic of Schoenberg at first hearing, is nonetheless a repetition of measures 15-17 and forms an intriguing composition on its own.