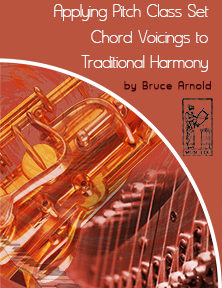 There are a set of four books in this series which step you through learning to replace traditional harmony chords with pitch class set chords. This gives your playing a very modern sound and can be used in any idiom. No complicated pitch class theory is involved in this series it is straight out application to common chordal situations that all musicians encounter. For guitarists no reading skills are required because all chord voicings are given in chord diagrams. Grand staff versions of chord sequences are included for pianist as is the actual voicings for each chord for guitarist who read music. Various videos are included in some of the four books to help you see and hear the application of these pitch class set chord voicings to various musical situations in a number of styles. 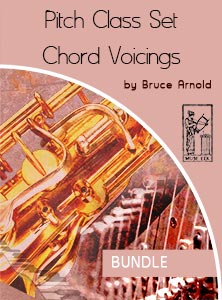 Half Price on All Four Books in this Series!

The BUNDLE gets you all four books in this series. If you want a way to get into pitch class set chord voicings without a lot of theory this is the course for you. Each of the four book steps you through a proven method for learning and applying these chords. Videos, MP3s and midi files help you learn to apply these chords. Guitar fretboard diagrams as well as grand staff charts for pianists are included. These chord voicings can be used in any style and suggested listening examples are included to help you hear the application of these sounds to rock, metal, jazz, classical, country and blues idioms.

The BUNDLE includes the following books and videos

"Applying Pitch Class Set Chord Voicings" to Traditional Harmony" provides a student interested in modernizing their chord playing with four pitch class sets that effective create a new and intriguing sound for playing traditional harmony. Examples of using these pitch class set is shown through common chord progressions. This is a direct application course spending most of the time directly apply these pitch class set chords rather than looking in pitch class set theory or long preparatory work to begin the application of this concept. Common re-harmonization principles have also been avoided so the student will find this to be a quick method in applying pitch class sets to traditional harmony and should find with marginal practice that their ability to complete this book will only take a few months.

"Applying Pitch Class Set Chord Voicings to Traditional Harmony" gives you 15 examples of how to change common traditional harmony into modern sounding pitch class set based chord progressions. The thrust of this course is direct application of most two pitch class sets, with occasional use of two other combinations to create a non tertial based sound that is modern yet not intrusive or dissonant.

"Just a few notes on the scope of this book. There are, of course other ways these chords could be voiced and various rhythmic concepts that could be introduced but the goal of this book is a simple application of these pitch class set chords so that you have a functioning alternative to tertial based chord voicings, giving you a modern sound that people will notice and like.

TIt is not that important that you know the internal interval combinations of these pitch class sets but I’m including it because as you dig deeper this information will become useful. But it is not needed to learn the chords initially.

The chords are presented and then examples are shown of how to apply the new pitch class set chords. You can learn the examples in this book but I also encourage you to write your own spending one week on each chord progression.

These études could be used in an ensemble setting or in solo piano or guitar performance. Some sections of these études may be better used in one or the other, depending upon their range. (If voicings go too low in register, they can conflict with a bass players range, so keep this in mind as you work through the course.)

So we have four 3 note chords. A three note chord would obviously have a “root” position and two inversions just like any major or minor chord. To keep things simple we are only going to voice these chords in one register that would fit well with playing chords in a band situation. You could form other voicings of these chords that could be used in other applications but again, we are trying to just replace the traditional chords you usually use with good and easy alternatives that create a fresh new sound.

Many Types of Files to Use

There are a lot of different ways to approach the application of pitch class sets to traditional harmony and over the last three decades I’ve found some really nice ways to integrate this ideas. "Applying 013 Chord Voicings" explores a concept that I’ve developed of applying three to four trichord pitch class sets to traditional harmony which is just modern enough to create a fresh and pleasing sound, but not too dissonant or strange that the casual listener or traditional musician would find it hard to play over or too odd to be accepted as a legit sound for idioms such as jazz, rock or folk music. To find this balance of new sounds that don’t ruffle any feathers so to speak, wasn’t easy though now that I have worked with pitch class sets for almost 30 years, I wonder why I didn’t see it from the start! But exploring the realm of pitch class sets is a deep dive and I had no one to guide me but my musicianship and discerning ear so it took time just to explore the many combinations of possible notes to find the right balance for each musical situation I found myself in.

As you can see in the examples above they are written in conventional staff notation. Both with one staff and a grand staff. For guitarists chord diagrams are also include.

Learning to effectively apply the chord voicings found in "Applying Pitch Class Set Chord Voicings" can be challenging for most students. But the way this course is organized you should find that you can play these chords and apply them to any tune in about six week. I have taught this course many times to my private students and find if you have an extra 15 minutes to practice these chords every day you will easily be able to apply them to any situation. Here are some recommendation on how to proceed with the "Applying Pitch Class Set Chord Voicings" course

Because the application of these chords will work in any idiom. Try applying these vocings and you will see that they have a wonderful sound in just about any idiom.

Recommended Listening for These Chord Voicings:

Have a story or a review you want to submit? We would love to hear from you. Please send us an email.