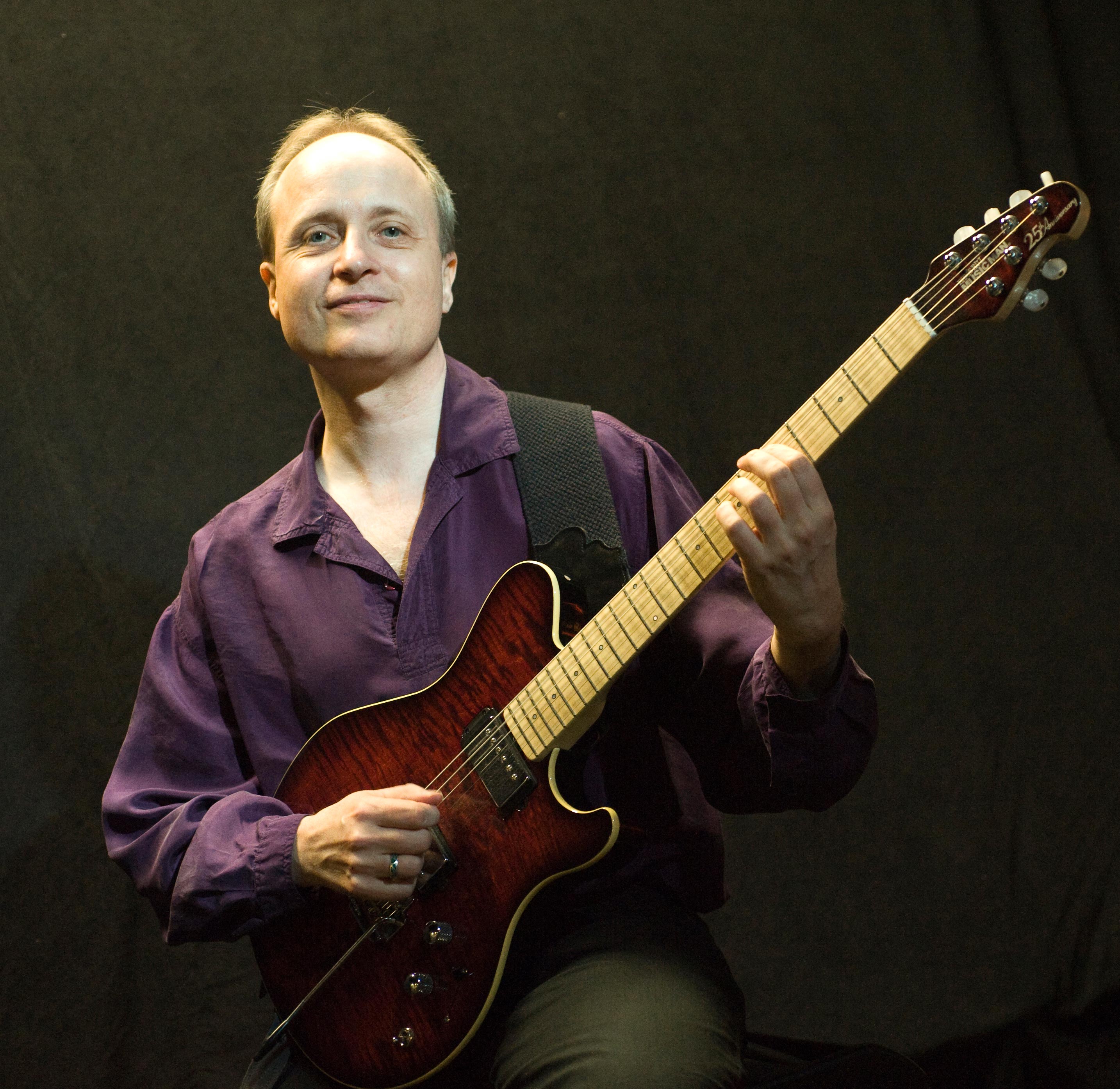 Bruce Arnold's EPK featuring various groups in which he has performed

Traditional Bio of Bruce Arnold can be found here.

Guitarist Bruce Arnold’s passionate pursuit of new ideas and applications for his beloved six-string instrument has taken him from the minimalist landscapes of Sioux Falls, South Dakota to the bustling city of Boston, where he studied and later taught at the Berklee College of Music, to the hallowed halls of Princeton University, where he taught for 30 years, retiring in 2019. Along the way, the music educator and author has managed to document his innovative ideas for guitar on a series of potent recordings that explore the notion of applying highly complex 12-tone theoretical constructs and serial methods to modern American improvised styles. As he wrote in the liner notes to his ambitious 1996 debut recording, Blue Eleven: “All of the work reflects my goal to achieve a balance between emotional expression and formal exploration.”

Throughout his impressive body of work over the past 20 years, Arnold has deftly pulled together a myriad of musical influences ranging from Messiaen, Schoenberg and Webern on the contemporary classical side to Bill Frisell, Pat Metheny and John McLaughlin on the modern jazz guitar side. Furthermore, he has laid out his ideas in clear, concise fashion in the 52 instructional books that he’s written on ear training, theory and technique (including his mammoth, 700-page “The Sonic Resource Guide”). His latest educational outreach endeavor is “Bruce Arnold's Jazz Guitar Summit NYC,” a series of guitar instructional videos that he oversaw for TrueFire Video (www.truefire.com) which break down specific techniques for aspiring players. Such celebrated New York-based six-stringers as Jack Wilkins, Leni Stern, Sheryl Bailey, Peter Leitch, Mimi Fox, Brad Shepik, Peter McCann, Serbian-born classical guitarist Dusan Bogdanovic and other prominent players were recruited by Arnold for these enlightening instructional videos. As he explains, “This video series is an outgrowth of the New York University Summer Guitar Intensive that I headed up for six years. All of these people were coming in and doing clinics for the students in this program I established, and I just thought, ‘This is amazing! We need to document this.’ These are all great players with a lot to offer to aspiring guitarists who are looking to improve their playing significantly. It’s just a treasure trove of information for guitars of all levels.”

As for his own music, Arnold continues his various applications of the classical based pitch class set theory. explains. “This is something that I got into in the early ‘90s,” he explains. “When I was living in Boston, I had been playing in straight ahead jazz groups, fusion groups, rock groups, metal groups, and then when I moved to New York City in 1988 I started doing working with this band Spooky Actions where we played music by Messiaen, Webern and Schoenberg. And since then, this has actually been my baby -- this whole pitch class set method. So now when I improvise, whether it’s on a jazz standard like ‘Stella By Starlight’ or McCoy Tyner’s ‘Passion Dance’ on a Webern piece or whatever, I’m using the pitch class sets that they used in the composition. That’s really my thing.”

Arnold’s focus on pitch class set theory since 1990 came after years of drifting between various styles of guitar playing. “When I was in Boston I was like the #1 call guitar player in town. It was like, ‘Oh, you want jazz? You want country? You want free improv?’ Whatever they wanted, I’d just do it. When I got to New York my attitude was, ‘I don’t want to do that anymore. I want to do something that expresses me!’ And that’s when I started exploring this hexatonic thing that McCoy Tyner was using, this idea of using two triads. And when I started teaching at Princeton, I began to realize that Schoenberg and Webern were doing the same thing, just with different sets of notes.” That eureka moment led 1996’s Blue Eleven, where he applied 12-tone constructs to a series of solo and trio “Variations.” After forming Spooky Actions in 1998 with saxophonist John Gunther, Arnold dove headlong into that heady territory on 2006’s Retrospective, which was devoted to the music of Webern, Schoenberg and Messiaen.

By making judicious use of crunchy distortion tones, Bruce Arnold is able to apply pitch class sets to all-out rock-tinged music, as he did successfully on 2010’s Heavy Mental and 2012’s darkly dissonant Lavadura (recorded in the wake of Hurricane Sandy, which destroyed his home studio in the basement of the artist residence complex known as Westbeth, located just 300 feet from the Hudson River). As he wrote in the liner notes to that most recent outing: “It had been my creative headquarters for many years. Hurricane Sandy changed all of that in a flash. A four-foot tidal wave broke open a 100,000 gallon fuel oil tank and completely filled the basement of Westbeth – and my studio – with a toxic brew. The CD is entitled Lavadura, which means ‘dirty water’ in Spanish. Named long before this tragedy, it came to foreshadow a period of time where I quite literally was dealing with dirty water and its aftermath for weeks.”

Like many other aspiring guitarists who came of age during the ‘60s, the Sioux Falls native, who was born in 1955, gravitated toward British guitar heroes like Jeff Beck, Jimmy Page and Eric Clapton while also soaking up the music of American blues icons Albert and B.B. King and Muddy Waters. “I played in a blues band before it was really popular,” he recalls. “Groups like the Rolling Stones, The Beatles, The Paul Butterfield Blues Band were just starting to put out stuff, so that music was in the air.” In high school he was placed in a talented students music program, which is where he was introduced to jazz. “I started getting interested in that and I had this idea of, ‘Wow! If you put this stuff with rock, it’d be cool,’ which of course ended up being fusion.”

Following two years at the University of South Dakota, Arnold enrolled in 1976 at the Berklee College of Music, where his classmates included such future guitar stars as Mike Stern, Bill Frisell, Steve Vai, Wayne Krantz, John Scofield and Kevin Eubanks. “That was really the time to be there,” he recalls. “And me coming from South Dakota, I just thought, ‘Oh, this must be how everybody plays here.’ Little did I know that these guy were all going to be the Who’s Who of guitar in the next 30 years. Meanwhile, I’m completely flipping out, thinking that I suck. But it really pushed me hard and triggered that old Midwestern ethic – you work hard, you get somewhere. So I just spent 99 percent of my time in the practice room, just trying to catch up.”

Following his five years at Berklee, Arnold studied privately with two influential teachers, Charlie Banacos and Jerry Bergonzi, who profoundly shaped his direction. “After hanging with them, I finally understood what was really going on with music,” says Arnold. “And then I took it one step further with this McCoy Tyner meets Webern concept that I got into.” He went on to teach at Berklee from1984 to 1988, though he had already moved to New York by 1986 and was commuting back and forth to Boston for two years. By 1989, Arnold was teaching at New York University and the following year he began teaching at Princeton. “That’s when I started getting into all this pitch class stuff,” he says of that pivotal year. “And one of the key factors in me getting involved in this music was the incredible library that Princeton has. I could just go get every score, every recording, check it out, take my time, listen to it and take all that stuff in. Because at that point I didn’t have enough money to go out and buy all those CDs and scores, but they were all free to faculty and students at the Princeton library.”

To date, Arnold has recorded 30 CDs of provocative, powerful music, most of which he engineered himself at his now-defunct recording studio in Westbeth. Though all of his equipment was destroyed in Hurricane Sandy, including guitars, amplifiers, pre-amps and $25,000 just in state of the art microphones, Arnold has recouped his loses and is now operating at a temporary space in the Music Building on 8th Avenue and 38th Street. “We’re just getting it set up, we haven’t even recorded there yet,” he explains. “Eventually I’ll get my own space again, but it’s gotta be above ground.”

Wherever he ultimately ends up, Arnold will continue to push the envelope with his innovative ideas and accomplished playing on the instrument that grabbed him from the time he was nine years old and saw The Beatles on “The Ed Sullivan Show.” With his rigorous use of pitch class sets, Arnold is charting a new course in improvisation and taking the guitar to places it has never been before.

A 2017 interview with Simon Sargsyan